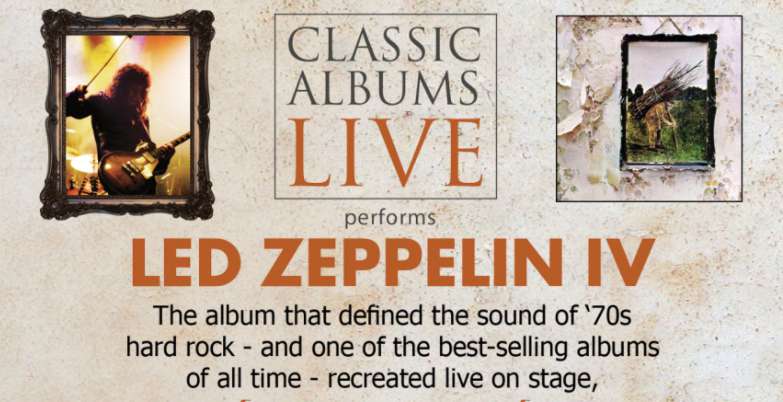 Led Zeppelin IV was a commercial and critical success, featuring many of the band’s best-known songs, including Black Dog, Rock and Roll, Going to California and Stairway to Heaven. The album is one of the best-selling albums of all time.

“Think of it as a recital,” says Craig Martin, founder and producer of Classic Albums Live. “We approach the music with the utmost respect and care, and deliver exactly what we promote, ‘note for note, cut for cut’ accuracy. From start to finish it’s an absolutely perfect record and we’re going to treat it with the ultimate respect.”

Anything but a cover band, like a symphony orchestra performing the works of Mozart, Classic Albums Live forgoes the gimmickry of costumes and impersonations, putting the music first. These world-class musicians tackle iconic music, concentrating solely on re-creating it as you remember it from the original recording. The attention to detail is staggering – every sound from the album is re-created live on stage by world-class musicians assembled for each album presentation.

Visit Clear Sky on Cleveland located across from the Capitol Theatre before or after the Concert for the Best food and drinks Downtown Cleveland Street Historic District.